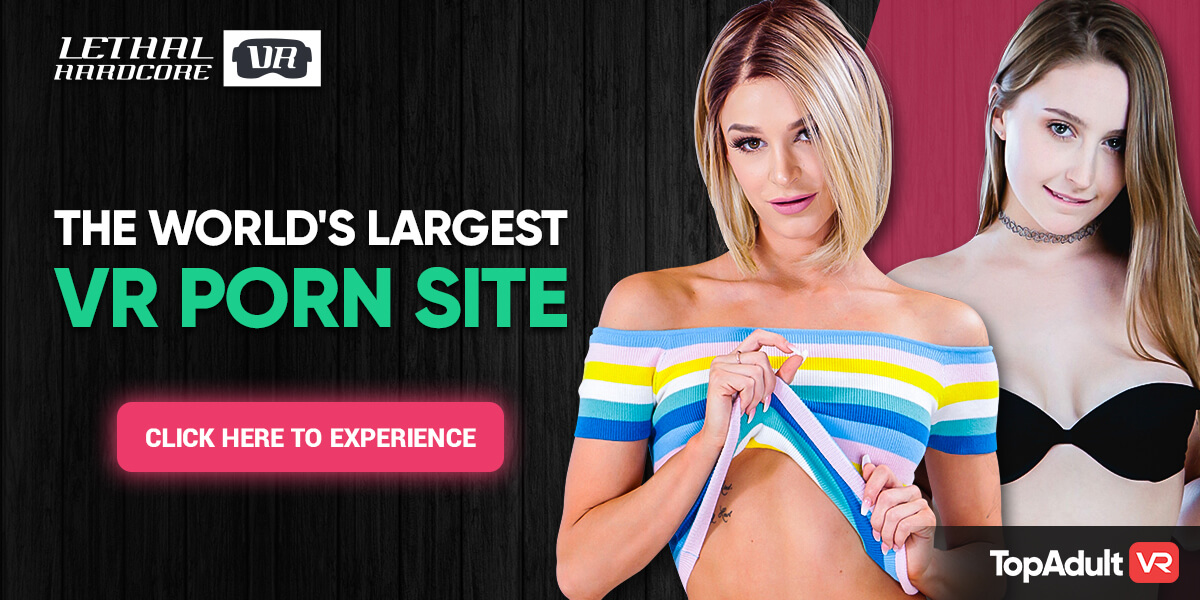 Don’t let the simplistic style of their website fool you because Lethal Hardcore VR has been able to feature some pretty big talent and notable names. After abandoning the often clunky constraints found in their early Whorecraft VR productions, the Lethal Hardcore brand has flourished by focusing on recreating more realistic virtual sex encounters.

The most recent scenes at Lethal Hardcore VR showcase a decent range of scenarios and performers but we’re pretty sure that all the productions are filmed at the same location. That’s not necessarily a bad thing as the folks at Lethal Hardcore use a nice house with many different rooms and sets to take advantage of. This is a far cry from their very first VR porn productions where a green screen was used to produce more imaginative settings. The overall effect of these early scenes was a bit hit or miss but since then, the brand has set new production standards and has improved greatly. Simple filters allow visitors to omit either the original Whorecraft or Lethal Hardcore’s signature scenes from the results.

Browsing the pages of VR videos available at Lethal Hardcore VR, we find a good number of Stepsister themed sex, cheerleaders, yoga enthusiasts and even naked probation officers gone wild. Each scene is hardcore and these ladies are going to get fucked as the viewer assumes the role of the male talent featured. Overall, the lighting and scale are well-done and the overall experience is good. There are short trailers available to give you a taste of each title, but these clips are not formatted to be VR ready so you’ll need to be a full member to get the effect.

Recorded in 180-degree, 3D and with rich binaural audio, Lethal Hardcore VR has been able to produce content that’s nearly on par with the leaders in the adult VR space. Each production is recorded in 60fps for smooth motion and improved clarity. A stationary camera in a central location is utilized and moved to accommodate specific sex positions.

One of the biggest surprises in Lethal Hardcore VR’s grab bag of fun would be the incredible star power they’ve been able to showcase in 180 degrees. The Lethal Hardcore brand itself has been around for some time, and this long-time connections in the industry have produced some notable stars and familiar faces on their pages. Elena Koshka, Lauren Phillips, Bridgette B, and many others have all appeared in Lethal Hardcore or Whorecraft VR scenes. As for the release schedule, you’ll generally see anywhere from three to five new VR productions from them each month.

Like the other leading content creators in adult VR, Lethal Hardcore VR produces scenes that are optimized for use on most leading VR headsets. You are free to use your Oculus, VIVE, Valve, PlayStation VR, Cardboard and more.

Is Lethal Hardcore VR to Die For?